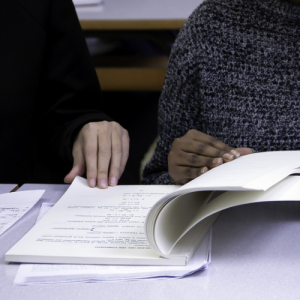 As a white, cisgender female, I was born into white privilege. I have learned first-hand that I would not be pulled over by the police because of a past due ticket, handcuffed and taken to jail; but I watched as an African American staff member experienced that very thing while on his way to a work assignment in a local community which has a history of racism.

Justice is a basic part of Metropolitan Community Churches, which was created because Gay and Lesbian people were not welcome in traditional churches. Our foundation is based on a lack of privilege, or access to the spiritual world. A lack of a place for us is what brought Rev. Troy Perry to a place where he asked God for a way…and MCC was the answer. That being said, we need to acknowledge that even in our roots, we had inequality. All original ordained clergy were male, women were not given a place in leadership at the start. This changed over time and our focus expanded as did the community, to include our transgender and bi-sexual brothers and sisters, those who identify as intersex, queer and questioning as well as our allies.

In MCC we aim to join in helping people recognize their internal biases and work to eliminate them. We seek to recognize white privilege as it arises in our interactions and find new ways of being in community and supporting one another.

It is my belief that MCC needs to be about meeting the needs of the world, and that means meeting the needs of people and recognizing and valuing the contributions of people from different walks of life. We want to be a place where people, regardless of the color of their skin, are welcome and all see themselves in MCC. Many white people have racial biases that they don’t even recognize. I believe that if we are welcoming of what different people bring to the table and are willing to learn from one another and to celebrate our roots, we will be so much richer. In MCC we aim to join in helping people recognize their internal biases and work to eliminate them. We seek to recognize white privilege as it arises in our interactions and find new ways of being in community and supporting one another.

ABOUT THIS MCC AUTHOR: Clare Coughlin has been a member of MCC for 21 years and has served in many capacities in her local church, Divine Peace MCC in Waterford, Michigan USA.  She is currently serving on the Governing Board of MCC and on the Commission on Pathways to Healing and Reconciliation.  She lives in Redford, Michigan USA with her wife Barbara. They just recently celebrated 33 years together and have been legally married since 2015.