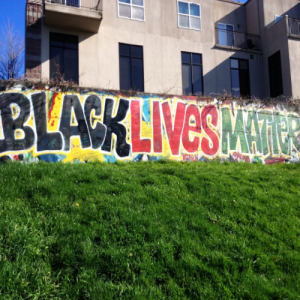 On my first visit to an MCC church, it was the first time in my life in a religious setting that both my sexuality and the color of my skin were considered simultaneously gifts of God and gifts to the church. Every song, sermon, and ritual centered the experience of historically oppressed peoples, including Black people. And, unlike in many other mixed settings, I did not have to search in vain for the witness and ministry of Black people of faith. They were present and thriving all around me in the local church and throughout the MCC denomination.

As I became more active in my local church, I soon learned why MCC was uniquely committed to ending oppression of all people and to standing in solidarity with Black people in the ongoing movement for freedom and justice. This commitment stems from MCC’s own origins as a movement dedicated to the principle that every single human being is created in the image of God. This image of God confers upon all humans worth and dignity as a birthright. In MCC, Black Lives Matter because we know that, as God’s creation, we all are the very manifestation of a radical love so generative and so transformative that it can be nothing other than good, and thus, worthy of dignity.

MCC has been persistent and unapologetic in its testimony to a fundamental truth that too many find hard to believe . . . Black life is beautiful. Black life is worth protecting. Black Lives Matter.

Inspired by the Women’s Liberation and Civil Rights Movements of the 1960’s, MCC understood, long before many other religious organizations, that a true movement for justice for all people had to be feminist and anti-racist. Accordingly, I walked into a church willing to confront and wrestle with the sins of sexism, heterosexism, racism, and class oppression. MCC is a visible religious space offering a generative, hospitable, and liberating environment for the needs, concerns, and interests of the black body. By the time I found the courage to return to church and chose to visit MCC, I found a truly beloved community, a coalition of people from diverse backgrounds and experiences, willing to struggle with me to bear witness that Black lives matter. MCC has been persistent and unapologetic in its testimony to a fundamental truth that too many find hard to believe . . . Black life is beautiful. Black life is worth protecting. Black Lives Matter.

ABOUT THIS MCC AUTHOR: Rev. Dr. DeWayne L. Davis, Senior Pastor of All God’s Children Metropolitan Community Church in Minneapolis, is a cleric ordained by the Universal Fellowship of Metropolitan Community Churches, with expertise in social justice analysis, advocacy, and organizing. He serves on the MCC Global Justice Institute’s Public Policy Team, representing the denomination’s public policy advocacy initiatives at the state and federal level. Rev. Davis previously served as the Domestic Policy Analyst in The Episcopal Church’s Office of Government Relations where he represented before the U.S. Congress and the Executive Office of the President the domestic social policies established by the Episcopal Church’s General Convention and Executive Council. In the capacity, he organized the Episcopal Church’s advocacy for marriage equality in Washington, DC at the U.S. Supreme Court.  Read More

He holds a B.A. in Economics and Philosophy from Howard University and an M.A. in Government and Politics from the University of Maryland at College Park. Rev. Davis received his Master of Divinity degree with honors from the Wesley Theological Seminary in Washington, D.C. in 2012. He received his Doctor of Ministry degree in Biblical Preaching at Luther Seminary in St. Paul, MN in 2020.