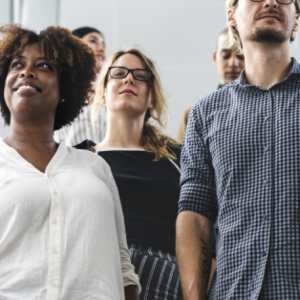 MCC was certainly founded by and for gay and lesbian people who had been ostracized, ejected, or simply unwelcomed by their former religious communities. In that sense, we certainly were the “Gay Church” in the 1960s and 70s. AND, we were always more than that. Even in the earliest days of MCC (the first service!), there were straight, bi-, trans- and gay and lesbian people in attendance. There were always people from very different religious backgrounds (including those other than Christian), and from very different life experiences. Still, MCC’s radical welcome of LGBT people, as well as our embrace of theologies of gay and lesbian (and later, queer) liberation has set us apart from other mainline religious bodies.

MCC was willing, before others, to be a church of, by, and for gay people and for those living with AIDS..

The point here is that MCC was willing, before others, to be a church of, by, and for gay people and those living with AIDS. Because of that willingness, we were able to minister to people suffering for these and other reasons when other churches turned them away. MCC was also willing to be out, proud, and publicly active as social activists and justice champions for the causes that were “risky” for others.

In the last 20 years, MCC has been called the “Queer” church … and that’s also true. Queer, in this case, isn’t about a particular identity or orientation as much as it is a disruption of normative ideas about sexuality and gender.

MCC is a church on the margins willing to be bold and courageous in including people that many churches either want to exclude, ignore, or ‘tame.’

MCC is a church on the margins willing to be bold and courageous in including people that many churches either want to exclude, ignore, or “tame.” EVERY person who is interested in working for radical love and justice, no matter their sexual or gender identity, could find a home – as they are – in MCC.

We use cookies to ensure that we give you the best experience on our website. If you continue to use this site we will assume that you are happy with it.OkRead our privacy policy