Does MCC respect other faiths? 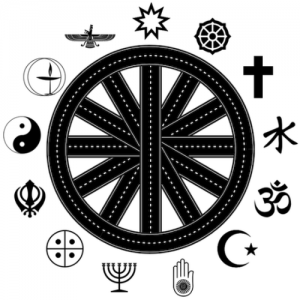 Does MCC respect other faiths?

My name, in the virtual world of Second Life, is CristoferAslan Muircastle and I am the Virtual Chaplain of an 11 year old community that exists solely in a virtual world. Sunshine Cathedral of Second Life is a “house of prayer for all people.” While we are an MCC affiliated group supported by Sunshine Cathedral in Fort Lauderdale, Florida we welcome people from all over the world, from all faith traditions and people who describe themselves as “spiritual but not religious.” Our goal is to provide a community of people in the virtual world of Second Life that allows each person to explore their own spiritual path, at their own pace, from their own background and upbringing whether they ever attended a church, synagogue, mosque or nothing at all.

I still consider myself a spiritual seeker existing in an “in between” space that really has no clear identity. Raised as the oldest daughter of a Baptist preacher in the southern United States, I took instruction to become a Roman Catholic, but I never took the last step because my parents so vehemently objected to me becoming a “Catholic.” Frankly, I was stunned at their response, naively thinking they would be happy that I was actively searching and traveling my own spiritual path.

After many years of being against the idea of organized religion, I visited an Episcopal Church built on a hilltop just outside Nashville, Tennessee – ironically in the exact spot that I last saw a KKK cross burning one evening years before. For me, the Episcopal Church was the perfect mix of ceremony and theater, teaching on ethics, and spiritual connection with a God of my understanding.

When I immigrated to Canada in 1998 I attended the Anglican Church of Canada and continued to search for my own individual spirituality. Discovering the work of Carter Heyward, a feminist theologian and one of 11 women who were “irregularly” ordained as clergy in 1974, was a turning point in my spiritual life. She wrote in language I could understand. She questioned things that had always troubled me. Her writing demanded that I “deconstruct” the God of the Baptist church, the Episcopal Church, the Anglican Church of Canada, and, indeed, ANY church in order to find what I believe about life and death, good and evil.

With her companionship and mentorship, and that of Virginia Ramey Mollenkott, I enrolled in a class at Episcopal Divinity School in 2002 and ultimately graduated with a Masters in Theological Studies in 2006. Having felt “called” to ordained ministry since an early age I discovered Metropolitan Community Churches through some of the classmates and was ordained on October 27, 2007. We launched the group in Second Life a little over a year later. I completed a Doctor of Ministry degree in 2012 that was focused on the importance of teaching and building faith communities online. Who could have imagined that this research would so perfectly prepare me for the age of CoVid-19 in the year 2020.

I am now a full member of a Reform Jewish congregation, Central Reform Temple of Boston (CRT) in addition to leading the community in Second Life. “Why?” you may ask. My partner of these past 11 years is a rabbi who was instrumental in founding this welcoming, inclusive congregation in Boston. They welcomed me with open arms as a full member, even though I am an ordained minister in an ostensibly “Christian” denomination, I have fully embraced their style of worship and preach as a guest speaker in their services from time to time, and lead their Tech Team as we moved into creating meaningful experiences of traditional Shabbat services online on March 13, 2020. CRT’s focus on the ethical teachings of the Jewish traditions helps keep my own moral compass pointing toward a better way of living in harmony with all creatures and the environment so rich with plants and rocks and oceans and all.

I continue to believe in the audacious welcome that I feel in MCC. It is not a welcome that demands I conform to creeds or doctrines. It is a welcome to explore and grow and change and mature in my spiritual practice and theological understandings.

To be honest I continue to struggle with my own identity as a “Christian.” I am disgusted by what the media refers to as “Christian perspectives” on many important issues of our day. The only reason I have not “converted’ to Reform Judaism is that I still feel “called” to companion people who have been damaged by so-called “Christian” churches who make an idol of the man Jesus and his teachings. And I do my very best to pattern my life after the teachings of the gentle rabbi from Nazareth known as Jesus.

MCC gives me a “safe space” to explore my own spiritual and theological identity. I am confident that even if I do ultimately decide to convert to Reform Judaism I will continue to have a place in MCC. That is why I stay, that is why I continue to believe in the audacious welcome that I feel in MCC. It is not a welcome that demands I conform to creeds or doctrines. It is a welcome to explore and grow and change and mature in my spiritual practice and theological understandings.

My goal is to ensure that everyone who is seeking finds a place to safely explore their beliefs, companion them on their journey, and learn from them as they continue to teach me in our exchange of ideas and deeply held convictions. I just want to be a better person living fully into what Jesus described as the second most important commandment – Treat others as I would like to be treated. I do not encounter the God of my understanding in lofty language about kings and rulers. I find Her in meeting people where they are and just walking the path of life together.